Castro is the capital and heart of the Big Island of Chiloe, located in the Lake District, and is the third oldest city in Chile. The location, culture and history make the city an urban centre to know and discover activities.

It was Captain Martín Ruiz de Gamboa and Avendaño who took possession of the archipelago and founded the city of Santiago de Castro, in February of 1567.

In 1788 Castro ceases to be the capital of the Spanish province because of two earthquakes that greatly reduced the city’s population. Ancud was the new provincial capital. But the progress of the Castro area reappeared thanks to logging, fishing and potato production, and together with the construction of the railroad, made it regain its importance as the centre of the archipelago. For 1982 it was again the provincial capital. At present, the Big Island has a population of 43,807 inhabitants (2017), of which about 77.7% live in the city of Castro. It has an urban infrastructure prepared for all its inhabitants and tourists who come every year to be amazed by the magic of the area.

Its geography, the colonial period and the late incorporation into Chilean territory made a mixture of cultures that formed traditional customs and gave a unique identity to the place. Although it is a deeply Catholic people, the inhabitant of the island maintains a complex belief system about the mythical world. Divinities of the water and the forest, magic formulas, sorcerers, shamans and an extensive Chilote (from Chiloe) mythology, coexist with Catholic religiosity. There are many myths that lead you to the dark jungle of the interior of the islands, such as the Trauco or the Fiura, or the deities of the sea, such as the Millalobo or the Pincoya. There are also accounts of the origin of the lands such as the fight between Tentén Vilú and Caicai Vilú in the early days of the world. There is also the Caleuche, boat of dead sailors, or the boatman of Tempilcahue, responsible for crossing the souls of the dead to the underworld. Witchcraft was very important on the island until well into the twentieth century. The sorcerers during the nineteenth century were more powerful and influential than the intendant/mayor of the Island. They were grouped in a secret society called the “Straight Province”, popularly known as the “Majority”, and they had a complex organization that was partially dismantled during the trial of the sorcerers of Chiloe, in 1880.

The slow process of opening the island to the rest of the world that began in 1826 with the incorporation of Chiloe into Chilean territory and that accelerated from the 1960s, and was transforming part of the traditions of its inhabitants. The new economic and social aspects and the big influence of the media weakened the old habits of the community, leaving a good number of traditional customs in increasingly remote and isolated places.

The churches of Chiloe, a World Heritage Site, are unique in Latin America because they have a religious architecture of wood. They represent a tradition initiated by the Jesuit Mission in the 17th and 18th centuries, continued and enriched by the Franciscans during the 19th century and which still prevails today. These extraordinary churches are a successful combination of indigenous and European culture, the full integration of their architecture into the landscape and the environment, as well as the spiritual values ​​of the communities. Sixteen churches are considered a National Historic Landmark of Chile, and since 2000, a World Heritage Site by UNESCO. 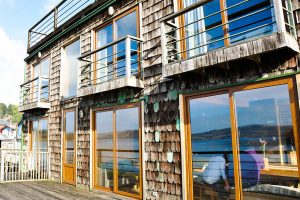 Built in a barrio of fishermen and craftsmen, this hotel presents a modern version of the classic palafito, the stilted wood house that personifies the Chiloé archipelago. Larch shingles and hand-carved doors from the original building harmonize with traditional wool Chilote blankets and sculptures, while large windows provide views of the bay of Castro, the capital of Chiloé Province, Patagonia, Chile.